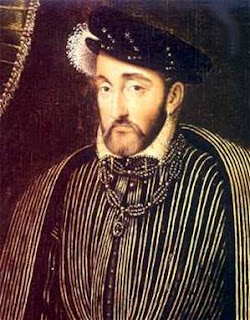 The Death of Henry II from a jousting accident is one of Nostradamus first and most famous fulfilled prophecies.

Here is the poem: The young lion will overcome the older one,
On the field of combat in a single battle;
He will pierce his eyes through a golden cage,
Two wounds made one, then he dies a cruel death.
(Century 1, poem 35)
In June 1559, Henry II ignored all warnings that Nostradamus gave him and participated in a jousting tournament against the Comte de Montgomery. Both men used shields embossed with lions. Montgomery was six years younger than Henry.
During the final bout of fighting in the tournament, Montgomery failed to lower his lance in time. It shattered, sending a large splinter through the king’s gilded visor (golden cage). The result was two moral wounds (two wounds made one and then he will die a cruel death.) One splinter spliced eye; the other impaled his temple just behind the eye. Both splinters from the lance penetrated his brain. Henry lived for ten days in agony, thus fulfilling the Nostradamus prophecy that he would die a cruel death.
Posted by thehappyblogger at 06:10